As Somerset Council elections loom, the Liberal Democrats are pledging to save county farms, saying that "watching them sell off the family silver has been heartbreaking". 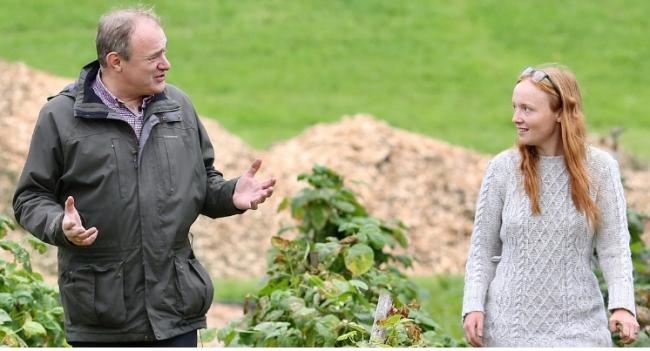 They are also asking farmers to share their thoughts on farming policies in a survey.

Somerset Liberal Democrats, with party leader Sir Ed Davey, have written to all farmers in the county as part of a new inquiry into how farming and rural businesses in the county can be better supported.

The move comes days after NFU President Minette Batters criticised the latest trade deal with Australia and said the government has shown a “total lack of understanding of how food production works”, introduced “completely contradictory policies” on farming, and risks “repeatedly running into crises”.

Speaking at last week’s NFU conference she said: “We need a plan that pre-empts crises, rather than repeatedly runs into them … this country needs a strategy and a clear vision for what we expect from British farming.

"We have completely contradictory government policies. It is raising the bar for environmental standards at home but pursuing trade deals which support lower standards overseas.”

Sarah Dyke grew up on a five generation family farm and is now a Liberal Democrat councillor in Somerset.

She said: "Buying local and encouraging others to do the same has always been important to me, and to the Liberal Democrats – we have always backed British farmers, recently proposing new legislation to protect them from being undercut by deals with countries with lower environmental and animal welfare standards than the UK.

“We know our farming industry is crucial to the nation's prosperity, but many are on the brink."

Cllr Bill Revans, leader of the Liberal Democrats on Somerset County Council said: "We’re committed to doing better by our farmers and that’s why I’m delighted to confirm that to help new farmers get started our manifesto for the new Somerset Council elections being held on May 5, will include a solid commitment to maintain Somerset’s county farms estate.

"Watching them sell off the family silver has been heart breaking for those affected; it was a Liberal government that invented county farms as a way for people to get started and so today we’re recommitting to saving them for future generations - part of our bid to put the heart back into Somerset.”

The county farms estate provides 5-20 hectare units for new entrants to start in agriculture but by 2018 the BBC reported that Somerset had run down its county farm estate from 62 farms to just 20.

The Lib Dems believe that county farms have a vital role to play providing new entrants with opportunities to start in agriculture in the heart of rural communities, allowing fairer access to land and farming in the county.

They also point out that the farms that remain are promoting regenerative practices with tenants moving towards net zero carbon emissions.

Food production is worth more than £500 million to Somerset, which has a network of more than 8,500 farmers and food producers, the highest number of any UK county.

Together these businesses, many of them family-run farms, directly employ more than 19,000 people, as well as supporting the many other businesses that form part of the supply chain.

Party Leader Sir Ed Davey said: “One of the many things that makes Somerset so special is its rich agricultural heritage. It is part of who we are as a nation.

“Boris Johnson and his team promised that they would use Brexit to help farmers - by increasing support, reducing bureaucracy and opening up new markets. But instead they have planned the transition so badly nobody knows what is happening - and the trade deals done so far are unfair to our producers.”

Hundreds of letters from Sir Ed enclosing the Somerset LibDems’ farmers survey are set to arrive on their doormats this week.